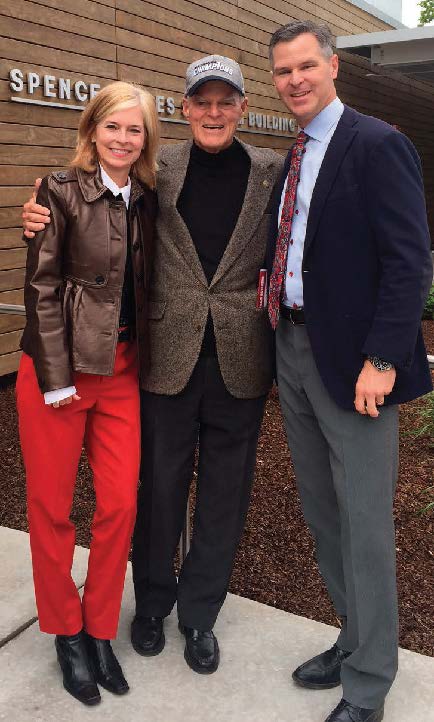 Dedication of the Spence Eccles Ski Team Building took place on a cool morning on April 26, with an enthusiastic crowd of donors, U administrators, ski fans, and the NCAA Championship Utah Ski Team. “This new home for our Ute ski program will be great not only for the team’s growing national and international reputation, but also for our ability to continue to recruit and compete at the highest levels,” said Eccles. “My family and I are thrilled that we could play a part in this fantastic new facility, and I’m humbled to have it bear this Ogden boy’s name.”

The two-story, 5,931 square-foot facility is located north of the McCarthey Family Track and Field and south of the Dumke Family Softball Stadium. Construction began in June 2016 and the team moved in the first of May.

Upstairs, the board room also serves as a trophy room, holding Utah’s 11 NCAA first place trophies and a plaque commemorating Utah’s individual NCAA national champions. A balcony with views of the city and the mountains—and especially of the Block U—provides outdoor space for gatherings.

“It is hard to find the right words to express my sincere appreciation for all the hard work and donor commitments that have made our new home possible,” said Kevin Sweeney, director of skiing for the U. “It is an honor to have the building named after Spence Eccles, ski team alum and NCAA All-American, who, as lead donor, has been intimately involved with the project since its inception. No doubt it will aid in our preparation, performance, and recruiting.”