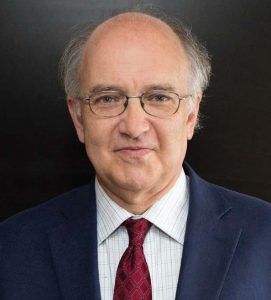 János Kollár, a Hungarian mathematician specializing in algebraic geometry and a former professor of mathematics at the University of Utah, is a co-recipient of the 2017 Shaw Prize in Mathematical Sciences. Established in 2002 in Hong Kong, and first awarded in 2004, the Shaw Prize honors outstanding contributions in astronomy, life science and medicine, and mathematical sciences. Kollár has donated a significant portion of his half of the prize to the U’s Department of Mathematics to establish the János Kollár Endowed Assistant Professor Lecturer at the U. Kollár says he was motivated to make the gift because the U provided such excellent working conditions during the 12 years he was here at the beginning of his career, and because several of the results that the prize committee recognized were developed while he was at the U.

Algebraic geometry—what exactly is it? Kollár defines it as the study of geometric objects that can be described by equations, the simplest examples being lines, circles, and ellipses. “I very much liked that one can use geometry and algebra—which are usually thought of as opposites—to solve problems together,” he says. “Then, as the subject advances, it brings in other areas of mathematics, like analysis, differential equations, and topology.”

Davar Khoshnevisan, chairman of the math department, says, “What makes this whole story compelling is that it’s directly related to the fact that algebraic geometry in the math department at Utah has a long and distinguished history, and János Kollár is an important part of that history.

“In 1970, when the College of Science was formed, the math department was already considered a powerhouse and one of the top research programs in the country. Kollár was recruited in 1987 and at the time, was recognized as one of the top algebraic geometers in the world. He and his department colleagues were instrumental in attracting and recruiting graduate students and postdoctoral scholars to the U.

“The dedication of the department and the students, the friendliness of the people, and the beautiful mountains and deserts were so memorable,” says Kollár, of his time at the U.

The new endowment will help support the research activities of postdoctoral instructors in algebraic geometry or related fields in the department, continuing a legacy of excellence in mathematics research and education at the U. It will provide young faculty members with the financial flexibility to explore and advance scientific research and education at their discretion. This measure of academic freedom is critically important in the formative years of a faculty career and for the long-term success and vitality of the department.

“The university has a rich history in mathematics teaching and research,” says Khoshnevisan. “We owe a debt of gratitude to János Kollár for his contributions to that legacy.”

It is anticipated that the first János Kollár Lecturer will be selected by fall semester to coincide with the new academic year.