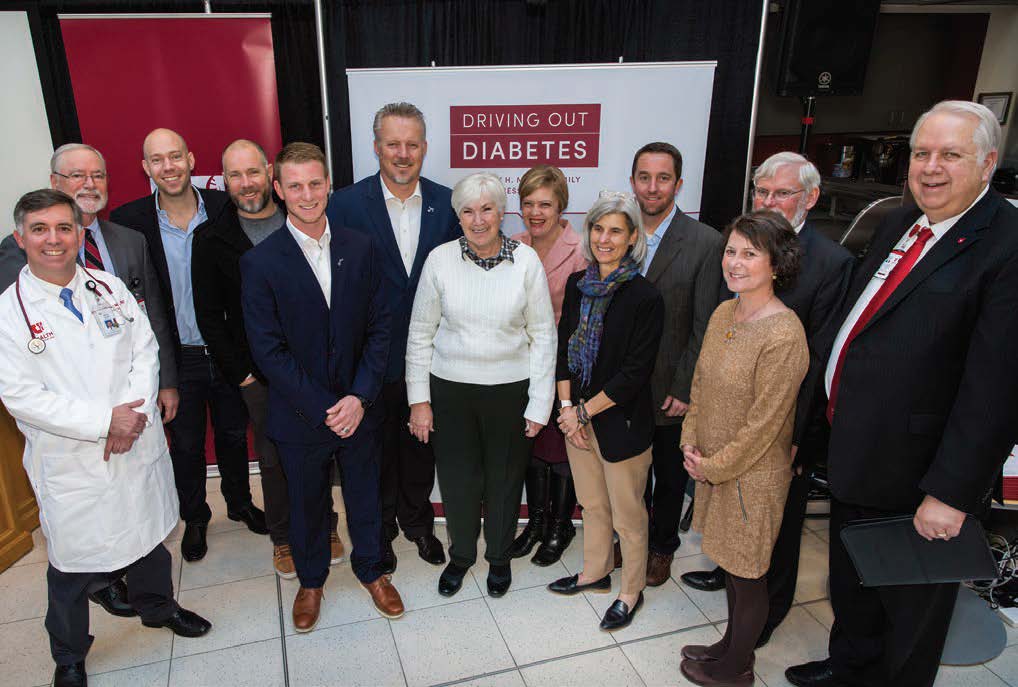 Gail Miller, center, celebrates the launch of a new campaign, “Driving Out Diabetes: A Larry H. Miller Wellness Initiative,” with her family, and friends from U of U Health.

The Larry H. and Gail Miller Family Foundation is donating $5.3 million to establish a diabetes prevention program called “Driving Out Diabetes: A Larry H. Miller Family Wellness Initiative.” This bold enterprise, announced November 13, 2017, will incorporate a novel, three-pronged approach to attack diabetes through prevention and outreach, clinical care, and research and training. Additionally, the program will proactively deliver screening services to populations who are most vulnerable to developing diabetes. The most common form of diabetes, type 2, can be prevented if caught early enough.

“As part of our mission to enrich lives, we are partnering with University of Utah Health on this initiative with the goal of having a lasting impact, especially on some of the most vulnerable in our state,” says Gail Miller, chair of the foundation. Miller describes her late husband Larry as a man with an iron will who found a way to accomplish everything he wanted, but stated, “when you get an illness like diabetes, you cannot will it away.” Larry, a noted Utah businessman and philanthropist, died from complications of type 2 diabetes when he was 64 years old. “Our family knows firsthand the effects of diabetes and we are committed to help educate and save others from this devastating disease,” says Miller.

“This exciting new initiative merges Gail Miller’s vision and passion for reaching people before they get diabetes—particularly the underserved—with the nationally-recognized community of diabetes researchers at U of U Health who are pioneering novel approaches to treating and preventing diabetes,” says Lorris Betz, senior vice president for health sciences and CEO of University of Utah Health.

Angie Fagerlin, chair of Population Health Sciences at U of U Health and director of the Driving Out Diabetes: A Larry H. Miller Family Wellness Initiative says, “We are incredibly grateful for this opportunity to play a crucial role in the efforts to eradicate the disease in Utah and serve as a model for the nation and the world. We deeply appreciate the strong support from The Larry H. Miller Family Foundation and, of course, Gail Miller.”