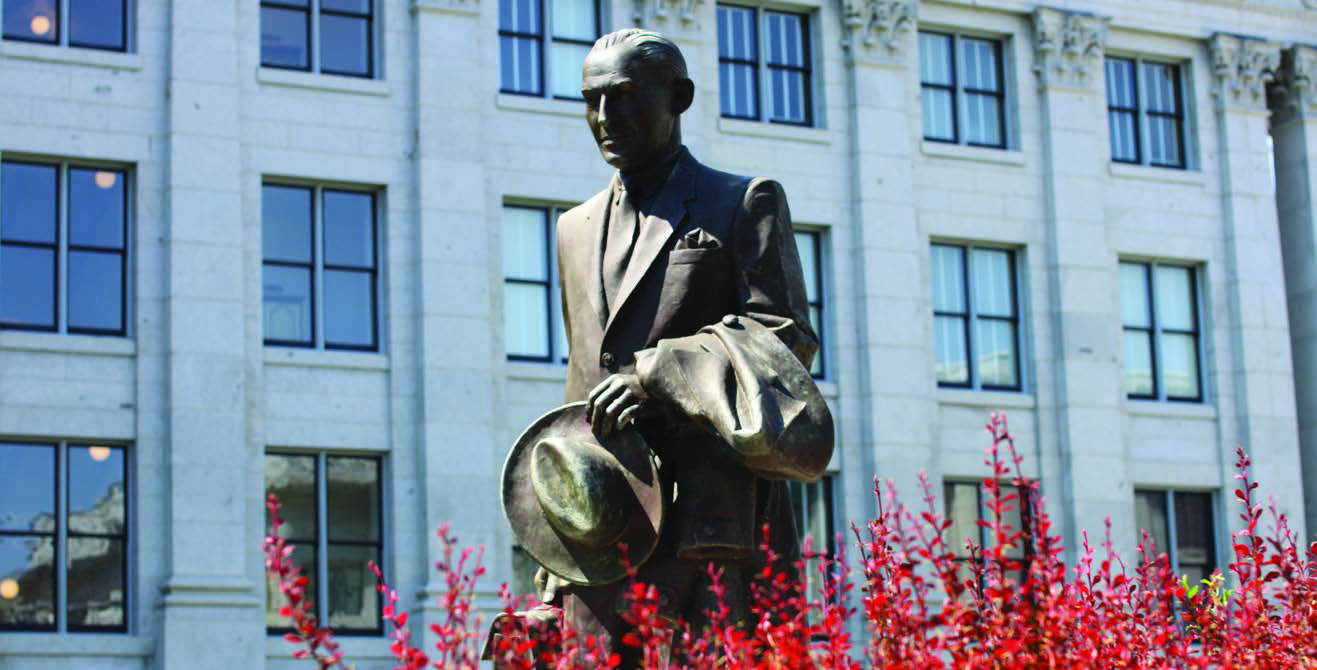 Dedicated on September 16, 2014, the nine-foot tall bronze statue of Marriner S. Eccles stands on the Utah State Capitol North Plaza. One of only four statues placed there, it recognizes his contributions to the state and nation as one of the most distinguished Utahns in the state’s history.

Spencer F. Eccles, nephew of Marriner S. Eccles, put it simply in explaining why two Eccles family foundations made a combined $10 million donation to establish the Marriner S. Eccles Institute for Economics and Quantitative Analysis at the David Eccles School of Business.

“There is no better way to honor Marriner’s life and pay tribute to his remarkable impact on our nation than to invest in students, faculty, and research, and to foster development of the next generation of great lead-ers to carry on his legacy,” says Eccles, chairman and CEO of the George S. and Dolores Doré Eccles Foundation, which joined with the Marriner S. Eccles Foundation to make the gift. The Charles Koch Foundation is providing a $10 million matching donation. 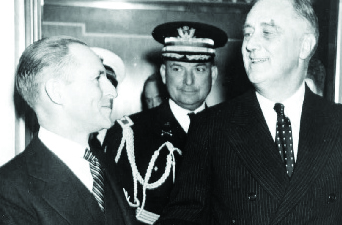 Marriner S. Eccles greets President Franklin D. Roosevelt arriving at the dedication of the new Federal Reserve Board Building in Washington, D.C., 1937. Five years after Marriner’s death in 1977, Congress named the building in his honor.

Marriner S. Eccles (1890-1977) was the oldest son of the U’s business school namesake, David Eccles, and a pioneering businessman in his own right—banker, entrepreneur, business leader, and chairman of the Federal Reserve Board from 1934-48. Historically one of the most admired citizens of the State of Utah and the nation, in 1948 he led the creation of First Security Corporation bank holding company and was tapped by President Franklin D. Roosevelt to manage the nation’s finances through “compensatory fiscal policy.” He authored the Banking Act of 1935, which reorganized the Fed to ensure the independence of the nation’s central bank, and he encouraged low-cost financing which helped reverse the disastrous downturn of the Great Depression. Considered by many the nation’s “father of the modern Federal Reserve,” he also helped create the Federal Reserve as we know it, as well as the Federal Deposit Insurance Corporation (FDIC) and the Federal Housing Administration (FHA). His role in strengthening the U.S. economy and furthering the free market system continue to be widely recognized both nationally and internationally.

The Marriner S. Eccles Institute will provide transformational opportunities for innovative faculty research, while also engaging students from many fields in developing quantitative skills necessary in business today. The donations will also fund a $3 million faculty Presidential Endowed Chair to be held by a prominent economist; the recruitment of five additional leading economists as faculty; and new student scholarships. Adam Meirowitz, Kem C. Gardner Professor of Finance, will direct the institute. Says U President David W. Pershing, “The institute will enhance and complement the university’s existing program in the Department of Economics, expanding areas of faculty expertise and interdisciplinary opportunities and — most important — engaging our students with a broad range of learning opportunities.” “Gifts from the Eccles family have been without equal in their transformative effect on the excellence in education at the U,” says Taylor Randall, dean of the David Eccles School of Business. “We take immense pride in bearing the name of David Eccles, one of the most prominent early industrialists of the West, whose entrepreneurial spirit, innovation, and ethics guide the school today. The addition of the Marriner S. Eccles Institute for Economics and Quantitative Analysis to the school bearing his father’s name extends the remarkable Eccles family legacy even further.”