The Nora Eccles Treadwell Foundation has been an incredibly generous, loyal, and consistent supporter of medical research at the University of Utah for more than five decades. When Nora Eccles established the foundation in 1962, she began the task of identifying the research areas she hoped to support. During her investigation, she became aware of the importance of basic medical research in alleviating the suffering caused by cardiovascular disease, diabetes, and arthritis. This realization led to her longstanding financial support that continues to have a major positive impact on research in these areas today.

In 1976 the University of Utah named the Nora Eccles Harrison Cardiovascular Research and Training Institute (CVRTI) in her honor. She and her husband, Richard A. Harrison, made frequent visits to CVRTI until her death in 1978. He succeeded her as chair of the foundation. 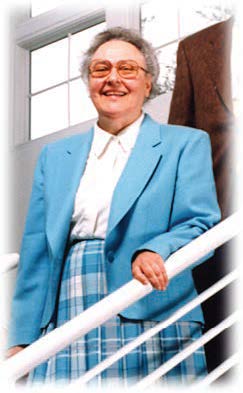 Under the able leadership of Patricia A. Canepa, the foundation’s loyal chair, the foundation provided more than $54 million to the University of Utah School of Medicine. This gave rise to hundreds of scientific papers and millions of dollars in federal grant support, including many years of generous foundation support to the CVRTI. Foundation funding has also provided for several endowed chairs and has enabled innumerable University of Utah graduate students and undergraduates to receive superb research training.

In November 2016 the Nora Eccles Treadwell Foundation, CVRTI, and the University of Utah’s School of Medicine lost a dear friend and advocate with Pat Canepa’s passing. From 1989 until 2016, Pat served as chair of the foundation. Her dedication to the legacy of her longtime friend, Nora Eccles Harrison, was a major factor in the outstanding contributions of the foundation to cardiovascular, arthritis, and diabetes research.

Pat grew up in San Francisco and graduated from the University of California at Berkeley in 1952. She maintained a keen interest in science throughout her life and for many years taught chemistry and physics at high schools in the Bay area. Her deep understanding of the rewards and challenges of biomedical research played an important role in her leadership of the foundation.

“She was a thoughtful and intelligent chair whose energy, enthusiasm, and commitment inspired those around her,” says Spence Eccles, Nora Eccles’ nephew.

Pat consistently promoted the professional success of all those the foundation supported. “We are enormously grateful for the interest she took in us as people and scientists,” says Kenneth W. Spitzer, professor of internal medicine and director of the Nora Eccles Harrison CVRTI. “She developed many long-lasting friendships at the School of Medicine and CVRTI and we will always remember her with much gratitude and affection.”