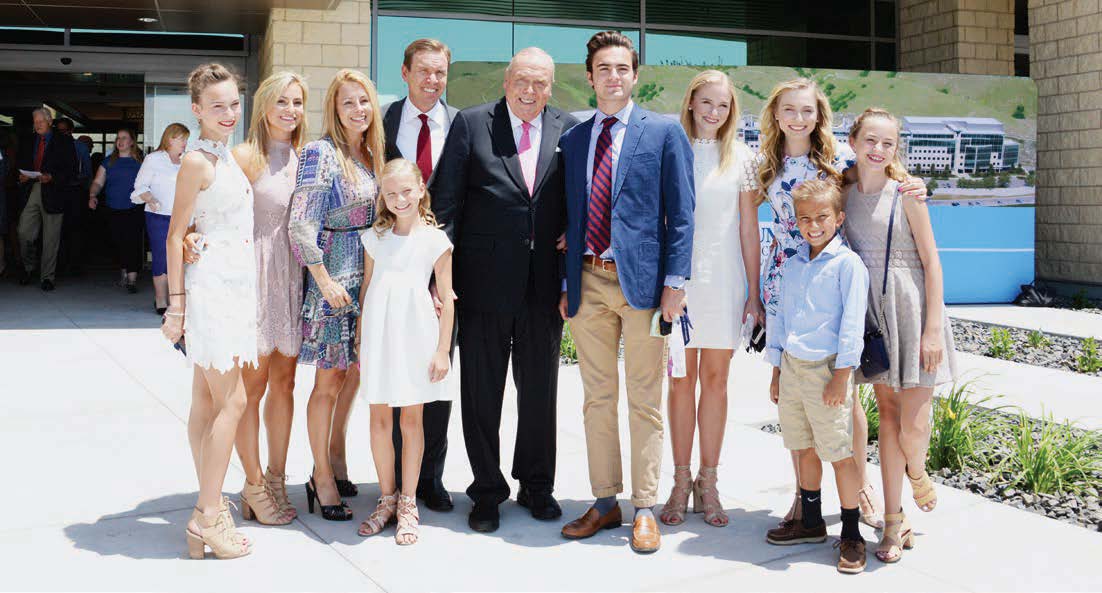 Jon Huntsman, Sr. celebrates the dedication of the Primary Children’s and Families’ Research Center with his son Paul Huntsman, daughter-in-law Cheryl, and his grandchildren.

Hundreds of donors, community members, and Utah dignitaries gathered on June 21, to celebrate the dedication of the Primary Children’s and Families’ Cancer Research Center, the new research facility of Huntsman Cancer Institute (HCI) at the University of Utah. The new building doubles HCI’s research capacity, giving scientists more space to study childhood cancers and cancers that run in families.

“Fifty years ago, parents of children with cancer had no hope,” said Mary Beckerle, CEO and director of HCI. “They were told to go home and enjoy their last days with their children. Today 80 percent of children diagnosed with cancer can expect to survive their disease. Research truly saves lives. Today we celebrate many advances in cancer research, and we look toward an even brighter future.”

More than 800 people attended the building dedication, including 200 members of the Mormon Tabernacle Choir. The choir sang several musical numbers and also offered a surprise 80th birthday song to Jon Huntsman, Sr., who founded HCI along with his wife Karen. The speakers, from Jon Huntsman, Jr. to Utah Governor Gary Herbert, continuously thanked Huntsman for his unwavering vision to create a cancer institute that seeks to be among the best in the world.

Huntsman himself kept the focus on the Institute’s donors and supporters. At one point, he brought up to the stage 11-year-old Andrew Van Wagoner, who was donating $119 that he raised going door to door for cancer research. Huntsman said the building was a tribute to the one million people who have contributed to funding HCI over the years.

“I want to thank the donors,” Huntsman told the crowd of supporters, “those of you who have reached deep in your pockets, the Andrew Van Wagoners, the young men and women—some of you have gone way beyond your ability to contribute to us. But you’ve done it anyway. And I am so grateful for the LDS Church and Intermountain Healthcare and the state of Utah for paying for part of this building. I want to thank you deeply.”

The new building includes 276 new research lab benches. It will also house many unique resources that offer scientists extra tools to fight cancer, including a new million-dollar machine that can sequence the human genome in less than a day. Enhancements also include a biotechnology center with the latest advanced imaging equipment.

Within the first several years of operation, the Primary Children’s and Families’ Cancer Research Center will employ an additional 300 faculty, staff, and students—with the capacity to add a total of 800 new employees. Those researchers will be working to defeat childhood and inherited cancers by testing new targeted therapies. They will also work to expand clinical trials and eliminate cancer health disparities with their research.