In 1983 Utah philanthropists Joseph and Evelyn Rosenblatt established the University of Utah’s premier award—the annual Rosenblatt Prize for Excellence—to honor Joe’s parents, Nathan and Tillie Rosenblatt, on the centenary of their immigration to Utah and in recognition of their legacy of civic leadership and generosity. 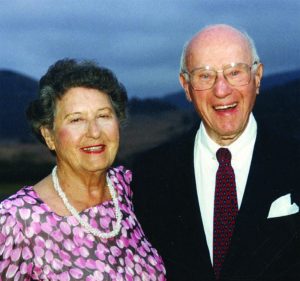 Nathan Rosenblatt immigrated from Russia to Salt Lake City in the early 1880s—by himself—in search of personal and religious freedom. He started out as a pushcart vendor of dry goods to Utah miners and ended up building a thriving industrial machinery business. He and his wife, Tillie Sheinbaum Rosenblatt, had three sons—Joe, Simon, and Morris—who inherited their father’s business and developed it to become Eimco Corporation, one of the world’s leading manufacturers of mining and processing machinery.

This year, the $40K endowed Rosenblatt Prize, which recognizes excellence by a member of the University of Utah faculty in teaching, research, or administrative efforts, was generously increased to $50K by a grant from the Joseph and Evelyn Rosenblatt Charitable Fund and an endowment from the university, in order to maintain its contemporary importance and influence.

“I believe that our continuing presence tells the winner that the Rosenblatt Prize is more than the obelisk and the money,” says Norm Rosenblatt, a son of Joe and Evelyn. “It’s also a living legacy.”

The 2018 award—announced, as it is each year, at Commencement—was presented to Richard B. Brown, dean of the College of Engineering. Brown is known for his pioneering research and commercialization of microprocessor circuits and solid-state chemical sensors, the applications of which range from drinking water to neurochemicals. Since he became dean in 2004, the number of engineering graduates has more than doubled and the number of freshmen has increased from 7 to 20 percent of the U’s total freshman class.

Brown received his doctorate from the U in electrical and computer engineering. “At my advisor’s recommendation, I marched at graduation here, which happened to be the first year the Rosenblatt Prize was given. (My advisor was a bit optimistic—it actually took me another full year to finish up.) I must admit that, at that time, I never imagined that I would have the privilege of serving as dean, and I certainly could not have imagined being honored with the Rosenblatt Prize.”

Following tradition, a dinner in Brown’s honor will be held this fall at Rosenblatt House, the family’s former home in Salt Lake City’s Federal Heights neighborhood, which Joe and Evelyn generously donated to the university in 1986 to serve as the residence for its presidents and their families. In addition, the Rosenblatt Fund is supporting the current renovation of the home.

Committed to their community, Joe and Evelyn, both U alumni, were generous with their assets, supporting additional campus initiatives as well as educational, artistic, cultural, and religious organizations throughout Utah. With the next generation now actively involved, the University of Utah continues to benefit from the generosity of the Rosenblatt legacy. The Rosenblatt Prize—a standard of excellence and an appreciation of achievement—is the affirmation: Great efforts deserve reward and cultivation.