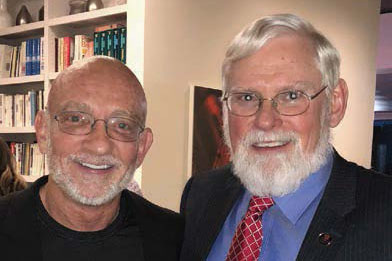 Approximately 100 U alums, parents of alums, and admitted students who are considering attending the U, gathered in Burbank, north of Los Angeles, on March 6, when U alum Mark Fuller HBS’76, founder and CEO of WET, also known as WET Design, hosted the group for a tour of his award-winning workshop. The tour included a demonstration of his dancing water fountains, fire and ice effects, and water jets shooting hundreds of feet into the air.

The tour was followed by a reception with Fuller. Among those attending were new U President Ruth Watkins, former U President David Pershing, Darryl Butt, dean of the College of Mines and Earth Sciences, and Rich Brown, dean of the College of Engineering. “It’s so cool to see alumni like Mark who value the education and experiences from their time at the U and are willing to share their success and give back to the university,” says Kevin Stoker, regional and chapter program manager for the Alumni Association. WET has created some of the world’s most famous water features—including The Fountains of Bellagio in Las Vegas, the Dubai Fountain in the United Arab Emirates, and the 2002 Olympic Legacy Fountain in downtown Salt Lake City. “This event in particular helped us to connect not only with alumni but with potential students too,” says Stoker.