Louise Degn, a journalist, documentarian, archivist, and University of Utah professor— known for her great sense of humor—was a broadcast journalist in Utah who won high acclaim for her investigative reporting. Before she died of bone cancer in May 2015, she made a planned gift to the U to establish The Louise Degn Endowed Scholarship in the Department of Communication for undergraduate students. “I suspect she wanted to make sure that a strong education in journalism was available to every undergraduate student who wanted it, regardless of financial resources,” says her good friend, Ann Darling, assistant vice president of undergraduate studies and a former chair of the department. The first recipient of the Degn Scholarship will be selected this spring. 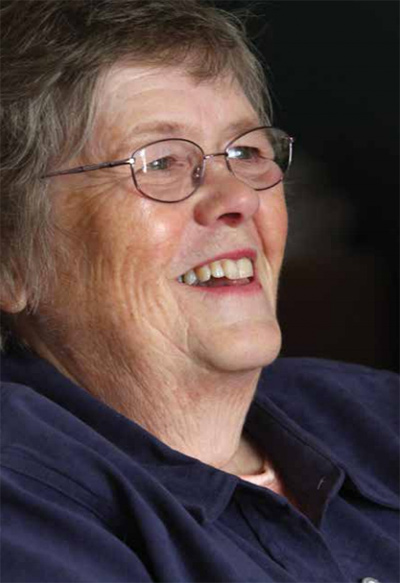 Broadcast journalist Louise Degn taught at the U for 20 years.

After graduating from Utah State University in 1968 with a degree in political science, Louise became only the second female broadcast reporter employed by Salt Lake City’s KSL Television. In 1970 she received a master’s degree in journalism from Northwestern University and began her 23-year career as a journalist. As a producer, she documented Utah issues ranging from the emerging women’s liberation movement, demolition of the LDS tabernacle in Coalville, Utah, and the Teton Dam break, to Howard Hughes’s will, Gary Gillmore’s execution, Rulon Allred’s assassination, and Mark Hofmann’s forgeries of early Mormon papers. Her stories appeared on TV news programs including “Dimension Five,” “TalkAbout,” and “Prime Time Access.”

The groundbreaking documentary Mormon Women and Depression, produced by Louise in 1979, broke the silence on mental health issues in the Church of Jesus Christ of Latter-day Saints community and generated requests for copies of the program from Mormon congregations throughout the world.

When a downturn in the economy in 1990 affected the local broadcasting industry, Louise left KSL to join the U’s communication faculty where she was an associate professor and served as associate department chair, and then director of the department’s undergraduate studies. She was passionate about teaching and her students consistently placed among the top 10 in the nationally respected Hearst Journalism Awards Program. “Louise had exacting standards,” says Ann. “She loved great writing and she struggled with tolerating anything less from her students.” She taught at the U for 20 years.

“Louise continues to inspire many of us,” says Glen Feighery, associate chair and director of undergraduate studies in the U’s Department of Communication. “Her guiding principle was ‘Do what’s right for our students.’ Louise helped shape a curriculum that is rigorous and challenging. She also helped shape a department that is welcoming, caring, and closely tied to the communities it serves. We are proud of the legacy that Louise Degn left our department and the scholarship in her name will honor her accomplishments.”

Much of Louise’s broadcast work is archived in the Marriott Library’s Special Collections and online at http://nwda.orbiscascade.org/ark:/80444/xv16961.