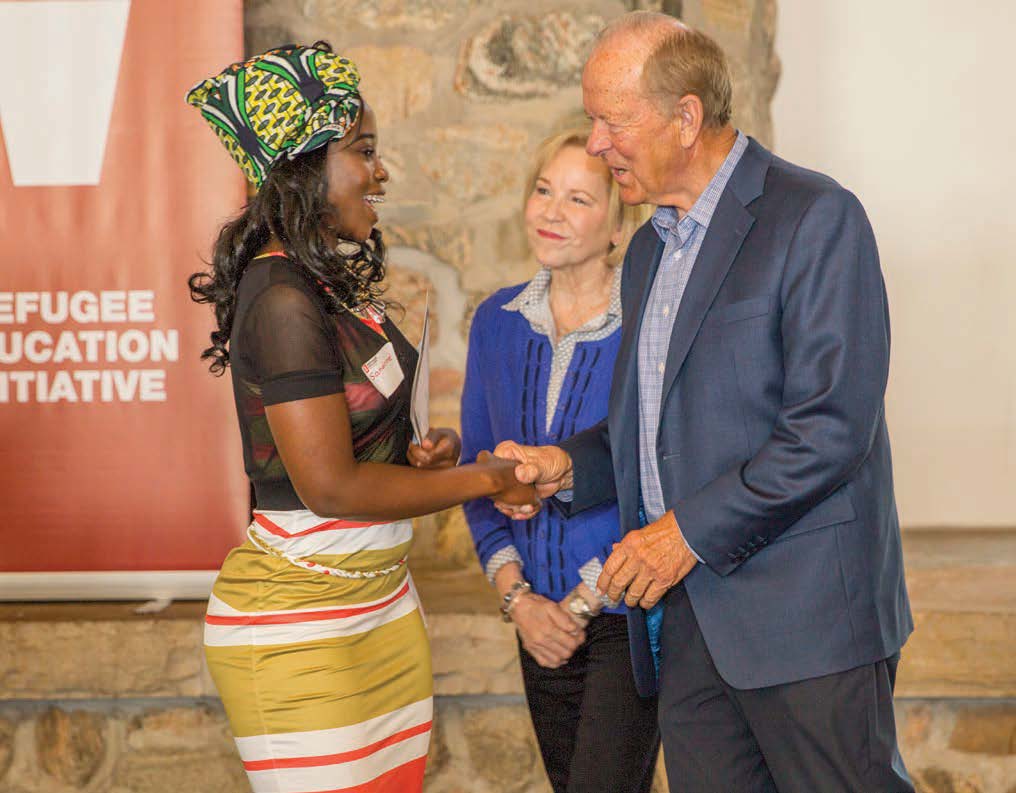 Refugee Sandrine Ingabire is greeted by Sara and Roger Boyer, founders of One Refugee.

When Roger and Sara Boyer became aware of the number of highly motivated, qualified, and capable refugees in Utah who had been turned down in their efforts to gain admission to college, they wanted to help. Of the state’s approximately 60,000 refugees, those who want to attend college have the same set of challenges experienced by all prospective higher education students—increasing tuition costs, student debt, and an ever more competitive environment. But they also have additional burdens—language barriers, culture shock, painful pasts, and the current political climate—that make their challenges especially daunting.

After studying the situation, the Boyers decided they could do the most good by identifying the gaps in services for refugees and then finding a way to fill those gaps. In January 2014 they established One Refugee, a private foundation, to do just that. One Refugee provides financial assistance to Utah refugees who are prepared and ready to succeed in college and then partners with the University of Utah and Salt Lake Community College on the admissions process. The goal is graduation and successful transition into a meaningful career. One Refugee covers pretty much anything the student needs—from tuition, textbooks, computers, and tutoring, to citizenship fees, prescription eyeglasses, and dental services.

“When we started in 2014, we hoped to get 100 enrolled, and after four years, we have assisted a combined total of more than 300 from both schools,” says Roger, who is a U alum and chairman of The Boyer Company, one of the largest full-service real estate development firms in the Western U.S. He and Sara are committed to funding this program long-term. “Our education initiative is not a standard scholarship program where we just write checks to cover tuition,” says Roger. “Our program is holistic and we work with all students one-on-one to assist them with their needs.” Sara adds, “We have loved getting to know the students and their stories. We see them at least twice a year and this has been incredibly rewarding for Roger and me.”

In early 2017, the Boyers realized that earning a diploma wasn’t enough to ensure a successful future, so One Refugee partnered with the O.C. Tanner Company and added a robust careers initiative designed to assist students in their employment pursuits after graduation, creating a seamless path through college and into a career.

The One Refugee partnership with the U is just one example of the Boyers’s loyal support of campus. For the past four decades, they have enriched areas including athletics, the David Eccles School of Business, and the School of Medicine, to name just a few. Their thoughtful support for refugee students is especially appreciated at this time when that population is dealing with so much uncertainty.

“We wanted to give back to the community in a concentrated way,” says Roger. “We know that education is the best pathway forward for all individuals, and refugees are a particularly vulnerable population. Without education and training opportunities, they are at risk for generational poverty. We saw the One Refugee program as a possible intervention.”