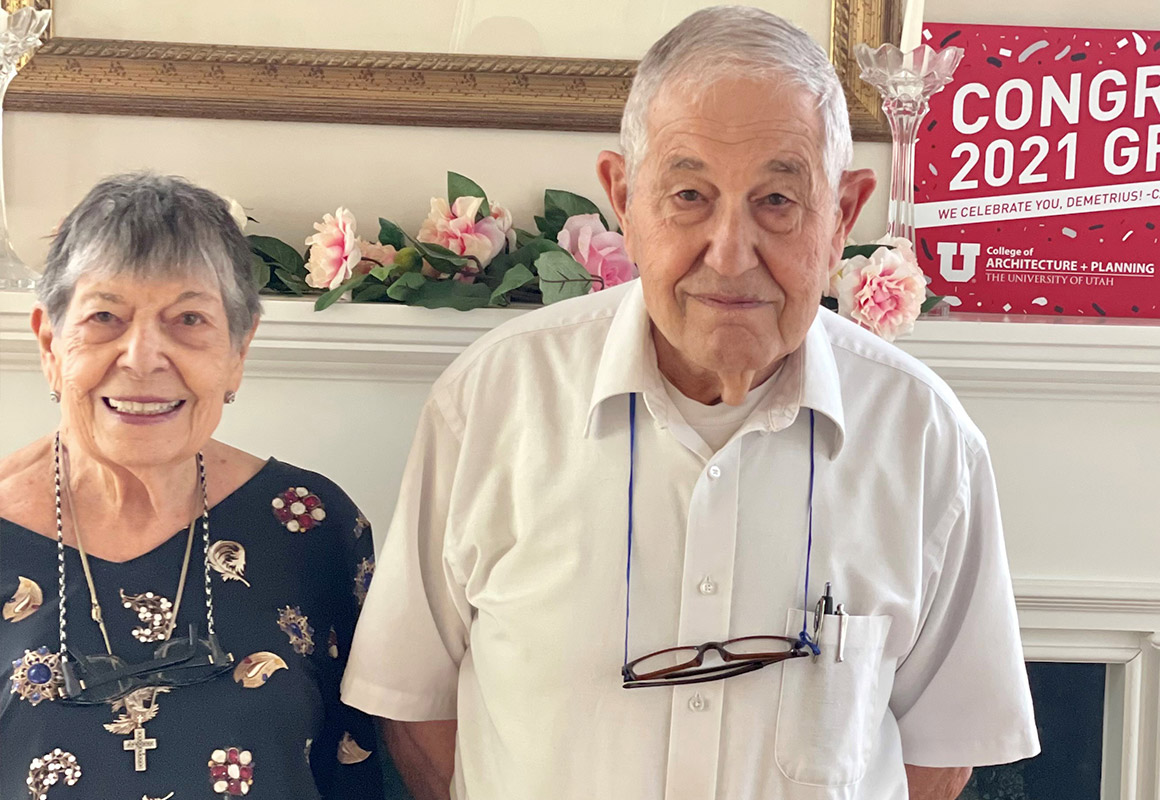 This past spring, Demetrius Kourtides was featured in Humans of the U as a 2021 graduate from the College of Architecture + Planning (“CA+P”). But he wasn’t your typical college student. After retiring from NASA, where he was a research scientist for 33 years, Demetri realized that he didn’t really like being retired. He spent four years as a chemist in a lab at the U’s School of Medicine but soon realized he wanted to do something different.  His appreciation for the historic buildings in his native country of Greece led him to take a non-credit class in the history of architecture. But it wasn’t until there was a devastating fire in the resort town of Mati, Greece that Demetri found his passion for city planning, which eventually led to him receiving his Bachelor of Science degree in Urban Ecology this past May.

What the U community doesn’t yet know, is that Demetri and his wife Bella established a generous legacy gift in gratitude for his experiences at the U and the CA+P.

Demetri and Bella met in 1968 at the American Hellenic Educational Progressive Association’s (“AHEPA”) biannual convention. The AHEPA’s primary goal at that time was to provide scholarships in the USA and support a large hospital in Thessaloniki, Greece, where Demetri was born.  While their lives were touched by philanthropy from the moment they met, it wasn’t until later in life when they were able to become donors. Demetri explains, “We were not able to give back all the time since we really struggled ourselves. Bella worked for a pharmaceutical company for 40 years and I had to work full time at the Utah State Hospital while attending BYU. After our retirements and the loss of our son, we decided to contribute back to society whenever we could.”

Demetri and Bella’s belief that philanthropy should support student scholarships and increase the number of minority and international students attending university, spurred their interest in giving to the U. However, it was Demetri’s experience at CA+P that led them to focus their gift to this College, in particular. “When I decided to go back to school at the College of Architecture and Planning, I was treated as one of the regular students which made me feel comfortable and not as an exception due to age. Again, the friendliness and responsiveness of the faculty was manifested in many, if not all, of the classes. I mean, the professors, the TAs, the students, everybody was just wonderful to me. Like, I was having a rough time in one of the GIS software classes during COVID-19, and the professor would schedule a Zoom meeting with me on a Sunday to help me out.”

When asked what they enjoy doing together, Demetri says, “Travelling to Europe, we love to see the architecture of the old churches and the history associated with those structures, but most important, meeting common people and talking with them.” In all that Demetri and Bella do, their generous spirit certainly shines through. It is with great appreciation and gratitude that the College of Architecture + Planning thanks them for the opportunity to fulfill their legacy gift.