The Marriott Library is marking an historic milestone this year—half a century on the University of Utah campus. A celebration at the library on March 2 attracted more than 200 campus and community members and featured remarks from outgoing U President David W. Pershing, Alberta Comer, dean of the library, and Saeed Shihab, vice president of the Associated Students of the U. Featured guest, Richard E. Marriott, chairman of the board for Host Hotels & Resorts, and representing the Marriott family, presented a $5 million gift to the library from the J. Willard and Alice S. Marriott Foundation. He shared some heart-warming stories about his family’s roots in Utah and their history attending the U, and reminded everyone that “no one has more stories than the library.”

Spread over five years, the Marriott Foundation gift will provide $2 million in expendable funds for building improvements, and $3 million to create an endowed fund to support, in perpetuity, the library’s greatest needs.

Improvements to the building will include installing a data visualization wall, adding new classrooms and active desks (recumbent bicycle and treadmill desks), and replacing worn furniture and carpet. New compact shelving on the first floor will create more space for study, research, and the construction of the Digital Matters Lab, while preserving the existing collection. The lab will increase access to 3D printing, audio and visual production studios, virtual reality, artificial intelligence, and other interdisciplinary research and learning technologies.

Throughout these past 50 years, the Marriott family, through their foundation, has been generous supporters of the library. Alberta Comer says the generosity of the Marriott Foundation is unparalleled. “Their gift will be transformational in the future success of the library.” 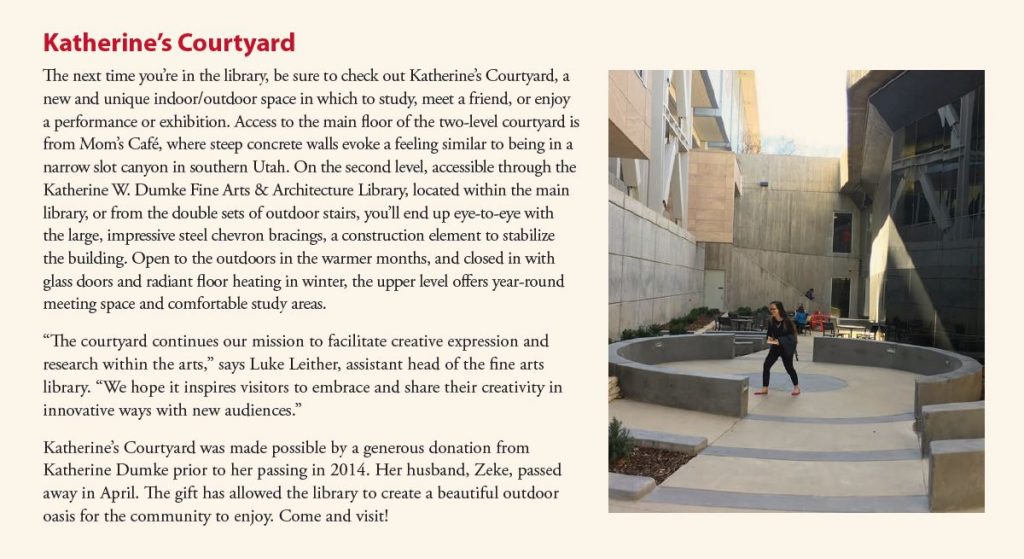